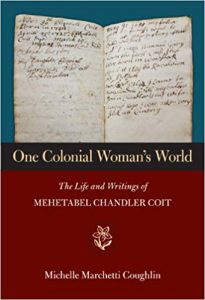 What was everyday life like for average men and women in early America?

Listeners ask this question more than any other question and today we continue to try to answer it.

Michelle Marchetti Coughlin, author of One Colonial Woman's World: The Life and Writings of Mehetabel Chandler Coit, joins us to explore the life of an average woman who lived in early New England.

This episode originally posted as Episode 032.

Michelle Marchettie Coughlin, a historian of early American women’s history and author of One Woman’s Colonial World: The Life and Writings of Mehetabel Chandler Coit, joins us to explore the life of an average woman who lived in early New England. Keep an eye out for her new book: Penelope Winslow, Plymouth Colony First Lady: Re-Imagining a Life