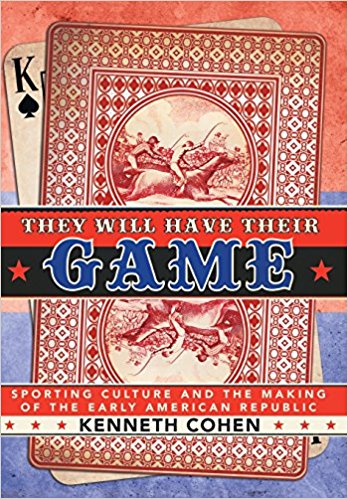 Our present-day American culture is obsessed with sports. To cite just two pieces of evidence of this, on average, more than 67,000 fans attend each National Football League game and more than 30,000 fans attend each Major League Baseball game. This is to say nothing of the millions of fans who watch these sports on television or listen to them on the radio.

When did America become a place filled with sports nuts? When did the business of professional sports become a thing in the United States?

Early American history has answers for us as does Kenneth Cohen, a curator at the Smithsonian’s National Museum of American History and the author of They Will Have Their Game: Sporting Culture and the Making of the American Republic.

Kenneth Cohen, a curator at the Smithsonian’s National Museum of American History and the author of They Will Have Their Game: Sporting Culture and the Making of the American Republic, leads us through an exploration of early American sport and sporting culture.

In your opinion, what might have happened if revolutionary leaders had not taken such a negative stance toward sports during the American Revolution? If they had had a more positive view of sporting culture, how would sports and sporting culture have developed differently in the United States?