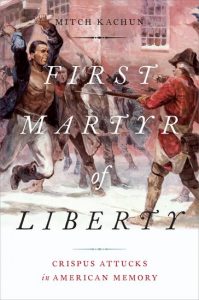 Samuel Gray, James Caldwell, Samuel Maverick, Patrick Carr, and Crispus Attucks. These are the five men who died as a result of the shootings on Boston’s King Street on the night of March 5, 1770.

To help us answer this question and to conclude our 3-episode series on the Boston Massacre, we’re joined by Mitch Kachun, a Professor of History at Western Michigan University and the author of First Martyr of Liberty: Crispus Attucks in American Memory.

Mitch Kachun joins us to investigate the memory and legacy of Crispus Attucks and the Boston Massacre. Mitch is a Professor of History at Western Michigan University and he’s the author of First Martyr of Liberty: Crispus Attucks in American Memory.

During our investigation, Mitch reveals who Crispus Attucks was and the facts and mythologies about his life; Why Attucks disappeared from the historical record after March 5, 1770; And, why Attucks and the Boston Massacre reappeared in Americans’ historical memory after the 1840s.

If you could travel back in time and have a conversation with Crispus Attucks, what questions would you ask him and what would you talk about?