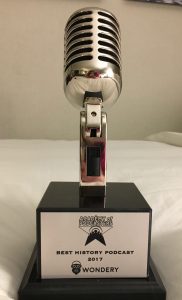 Ben Franklin's World is an award-winning podcast produced by the Omohundro Institute of Early American History and Culture.

The Omohundro Institute is a leading community of scholars exploring Vast Early America. Their award-winning books and journal, the William and Mary Quarterly, span topics from 1450 to 1820. Since 1943, their publications, fellowships, conferences, and lecture series have worked to create a dynamic early American history for scholars, readers–and now listeners.

A lot of work goes into producing this podcast.

This page provides a behind-the-scenes look at Ben Franklin's World and it is dedicated to giving credit to those who help make the podcast possible.

Twenty-Four Sound edited episodes 1-53. They also produced the original intro, outro, and show segment bumpers for the show, which you can hear in all episodes prior to Episode 228.

Breakmaster Cylinder composed the music you in hear in Ben Franklin's World.

Prior to Episode 228, the show used musical pieces by Bach.

Ben Franklin's World Around the Web

Since 2014, you can find regular posts about Ben Franklin's World on The New York History Blog: News & Views From The Empire State.

Between episodes 14 and 140, she recorded on a Heil PR-40 Dynamic Studio Recording Microphone. Today she records on a vintage Electro Voice RE-20 microphone that she connects to her 13″ Macbook Pro via a Focusrite Scarlett 2i2 USB Audio Interface and a DBX 286s Microphone Pre-amp Processor. She edits each episode using Adobe Audition.

How to Start a Podcast

Liz spent 18 months researching podcasts before she launched Ben Franklin's World. In addition to using Google Search to find information about podcasts and how to produce them, she listened to a lot of podcasts about podcasting. Her favorites still include Libsyn's The Feed, The School of Podcasting, The Audacity to Podcast, Podcast Junkies, and Podcasters' Roundtable.  Liz took a how to podcast course with Jeff Brown, a 26-year radio veteran who has leveraged his background to produce the successful Read to Lead Podcast.

You may find these blog posts over on Liz's blog helpful: